28 Data Breach Statistics That Will Inspire You (To Protect Yourself)

That’s why we’ve put together this list of data breach statistics. If you’re struggling to get more budget and funding for your cybersecurity initiatives, you have to be able to convey statistics appropriately. The following eye-opening stats can be used as powerful tools to help you convey the importance of security to your senior executives and board members.

Source: Global Security Performance: How Do Top Nations Stack Up? from BitSight

“54.8% of companies in the U.S. have a Sender Policy Framework (SPF) grade of C or lower”, having limited means to prevent spoofing emails.

Source: Global Security Performance: How Do Top Nations Stack Up? from BitSight

“Education accounted for 6.6 percent of all reported cybersecurity incidents in 2015.”

“99% of computer users are vulnerable to exploit kits (software vulnerabilities).”

“59% of employees steal proprietary corporate data when they quit or are fired.”

“28% of organizations have experienced an advanced persistent threat attack, and three-quarters have failed to update their third-party vendor contracts to include better protection against APTs.”

“63% of businesses don't have a ‘fully mature’ method to track and control sensitive data.”

“Nearly three in five Californians were victims of a data breach in 2015 alone.”

“In 93% of breaches, attackers take minutes or less to compromise 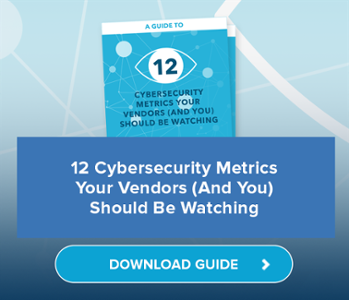 “Four out of five victims [of a breach] don’t realize they’ve been attacked for a week or longer.”

“In 7% of [breach] cases, the breach goes undiscovered for more than a year.”

“30% of phishing emails are opened. And about 12% of targets go on to click the link or attachment.”

“In 2015, at least 60% of enterprises will discover a breach of sensitive data.”

“Only 38% of global organizations feel prepared for a sophisticated cyberattack.”

“82% of companies with high performing security practices collaborate with others to deepen their knowledge of security and threat trends.”

Source: 2014 US State of Cybercrime Survey from PWC

“In 60% of cases, attackers are able to compromise an organization within minutes.”

“Companies with a rating of 400 or lower were five times more likely to experience a publicly disclosed data breach than companies with a 700 or higher.”

“80% of analyzed breaches had a financial motive.”

“68% of funds lost as a result of a cyber attack were declared unrecoverable.”

“The U.S. government has spent $100 billion on cybersecurity over the past decade, and has $14 billion budgeted for cybersecurity in 2016.”

“The cyber insurance market—mainly a U.S. market—has grown from $1 billion to $2.5 billion over the past two years, and it is expected to grow dramatically and expand globally over the next five years.”

Ready To Protect Yourself?

Acknowledging that cybersecurity is a major problem (and finding these statistics shocking) is one thing—but understanding what you can do in response is another. So if you’re wondering what you’re supposed to do with this information, you’re in the right place.

Your best bet is to make sure you understand how these metrics relate to your own security performance, and whether you are on the right side of these statistics. For instance, the 2015 Global Cybersecurity Status Report from ISACA states that only “38% of global organizations feel prepared for a sophisticated cyberattack.” Unless you want to be categorized in the 62% that don’t feel prepared for cyberattacks (or aren’t sure if they’re prepared), the best thing you can do is to start monitoring your performance (and your entire business ecosystem’s) and create a benchmark to track changes in your security posture. Creating a performance metric around cyber risk that is specific to your organization will help you protect yourself from being just another number.